No matter the type of job, we almost always need some form of storage. Chefs need their walk-ins and knife drawers. Mechanics need their toolboxes. Accountants use filing cabinets (physical and electronic). Software developers also require storage. When our code is running, we need memory locations to temporarily store data. Variables provide that storage. In the final section of this chapter, identifier naming rules and conventions are reviewed.

In Python, a variable is a location in memory (on the stack) that holds a reference to an object. The 'stack' is static memory set by the bytecode compiler. The stack is also known as 'local storage'. More on this below.

Conversely, values of the variables are stored on the 'heap' which is dynamic memory managed by the PVM or JIT compiler depending on whether CPython or PyPy is the implementation. The heap is also known as 'free storage'. More on this below.

All variables in Python reference objects. Each variable is an address location on the stack and it holds a reference (address) to the actual storage location in memory where the value is stored. This method of variable storage is different than that employed in some other languages. For instance in C++, for primitive variables like integers and floats, the variable location actually stores the value and not a reference to the value.

These are some relevant points about variables in Python:

Identifiers provide a convenient means to identify variables which is much nicer than using hexadecimal addresses. An identifier is a name for a variable, function, module, class, or any other object. Internally, to the PVM, the identifiers aircraft_range and aircraft_weight might be equivalent to the memory addresses: 0x93acf7b4 and 0x93acf8a9. In other words, those are the locations in memory where the values for aircraft_range and aircraft_weight are stored. Fortunately, we use the identifiers instead of the hex addresses to access the variables.

Let's now consider a code example and follow how the relationships between variables and objects work. Notice a new program named variablestoobjects.py is displayed. Recall that you don't have to create a new project for each new .py file. All of the code for this class can be contained within one project.

Lines 1 - 4 demonstrate the creation of four variables of different datatypes. And, each of the variables is initialized by using the '=' and a value. The '=' is known as the assignment operator. A variable is initialized the first time it is assigned a value. Again, the '=' is known as the assignment operator. It assigns values on the right to variables on the left. Variables on the left are also known as 'lvalues'. The 'l' represents a location in memory. To assign something to the right of the '=' to something on the left, the item on the left must have a name and be a storage location.

The purpose of lines 8 - 33 is to demonstrate how variables reference objects in Python. Keeping track of variable references and object addresses is not something Python developers normally do. However, you should have at least a minimal understanding of the process so it not mysterious if the need for additional investigation is required. Furthermore, some languages (e.g. Java) have similar memory management strategies while others (e.g. C/C++) have a considerably different approaches. By understanding how it works in Python, a developer should be more comfortable when working with memory models in other languages.

Now, let's take a look at the addresses to which the variables point. We use the built-in function id() to return the integer (or long integer if required) value of the address where the variable value is stored. Normally, computer scientists use hexadecimal values to work with addresses. Therefore, the built-in function hex() is used to convert the integral value returned by id() to a hex value. See the images of the calculator that were used to confirm that the integer and hexadecimal values are equivalent.

The value of 'a' is changed three times. Variables are called variables since the values that they reference can change (vary). Furthermore, the type of the value to which a variable points can also change. The type to which 'a' points was changed from integer, to float, and then to string. 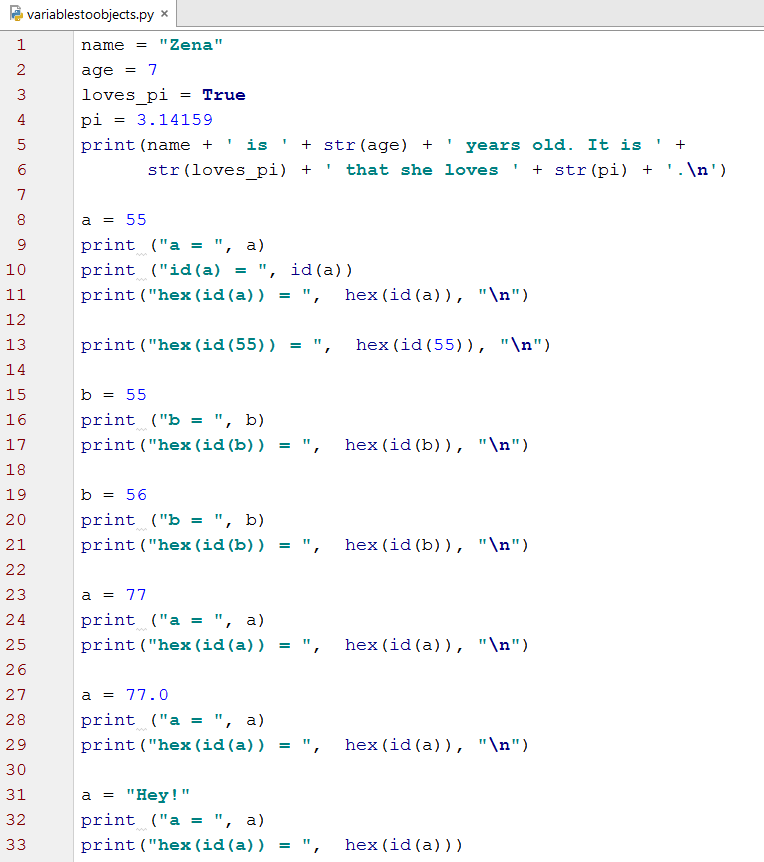 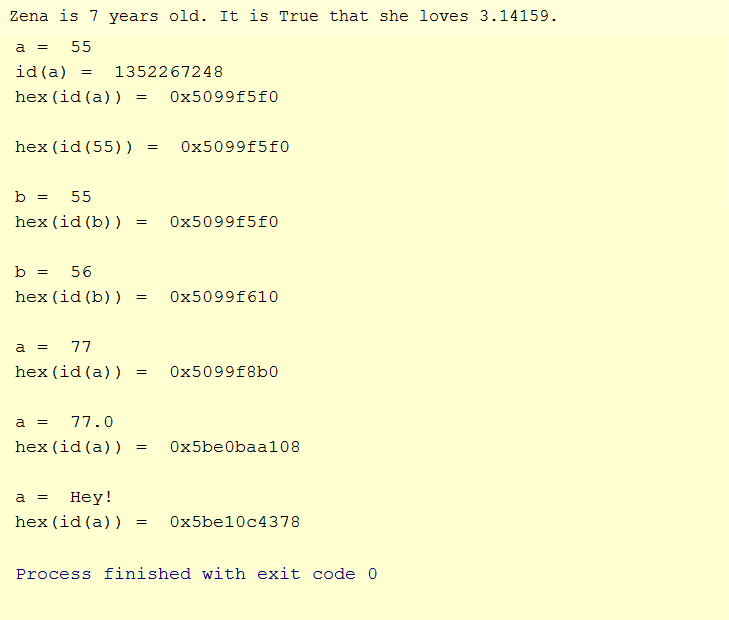 Python identifiers (names) have rules which govern their use and must be followed. There are also conventions that supply recommendations and should be applied if practicable.

Naming rules for Python identifiers must be followed or syntax errors will result.

Naming Conventions for Python identifiers are recommended but not required.

Remember that code is read much more often than it is written. Therefore, do your best to write clear and readable code. To the extent practicable, make your code declarative (readable) and semantic (meaningful).

The Python keywords (a.k.a. reserved words) are listed in the table below. Keywords are reserved by the language and cannot be used as identifiers.