Selection is the second of the three fundamental programming control structures. In this chapter we consider the various constructs that can be used in Python to make decisions. Remember that when making any decision in programming, the same question is asked. "Is it true?" That's it. No matter how large or small the expression, it must always resolve to a simple boolean answer of True or False. Also remember to include decision symbols in your flowcharts to represent decisions in code.

The following five decision structures are explained in this chapter:

The upper() function performs a temporary conversion of the letters in the fav_team variable to all uppercase. This enables the program to check for the letters 'cowboys' irrespective of the case combination the user entered. For instance, if the user entered all lowercase, all uppercase, or a mixed combination of case, by temporarily converting to uppercase and comparing the result to all uppercase (COWBOYS), the results will be true as long as those letters are entered in the correct order. At other locations in the program, the lower() function is used for the same purpose. 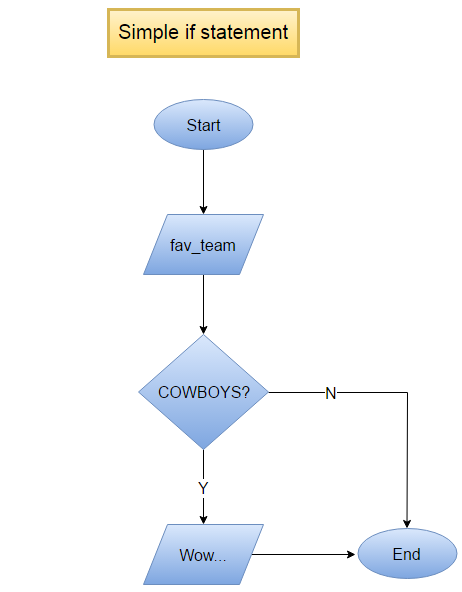 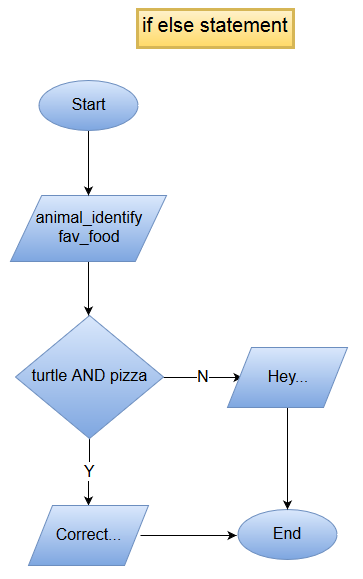 The 'if elif statement' enables a continuation of conditional testing. There is no limit to the number of 'if elif statements' that can be assembled together to produce an extensive series of logical tests. Lines 31-43 perform tests to determine the letter grade for a numerical grade entered by the user. In series of 'if elif statements' like that shown, as soon as one of the conditions evaluates to True the statements in that block will be executed and then the remaining elif's will be skipped. For instance, if a grade of 95 is entered on line 27, then the condition on line 34 will be true, the 'block' on line 35 will be run, and execution will jump to line 44 after the tests. See the use of the 'or' logical operator on line 31. The 'or', combined with the two conditions, determine if the grade entered is outside of the range between 0-100.

The if and elif statements on lines 51-61 provide another example of the elif. Notice also that 'and' and 'or' logical operators are included for examples.

Suppose you have an if statement with a series of and conditionals. How many and's must Python check to determine if the entire if statement is true? Well, for the total if statement to be true, all and's must be true so Python must check all of them. However, suppose the second and is false. Does Python need to check the remaining and's? No, Python can (and does) stop evaluating as soon as one of the and's is false. This behavior is known as short-circuit evaluation and is available natively in Python. 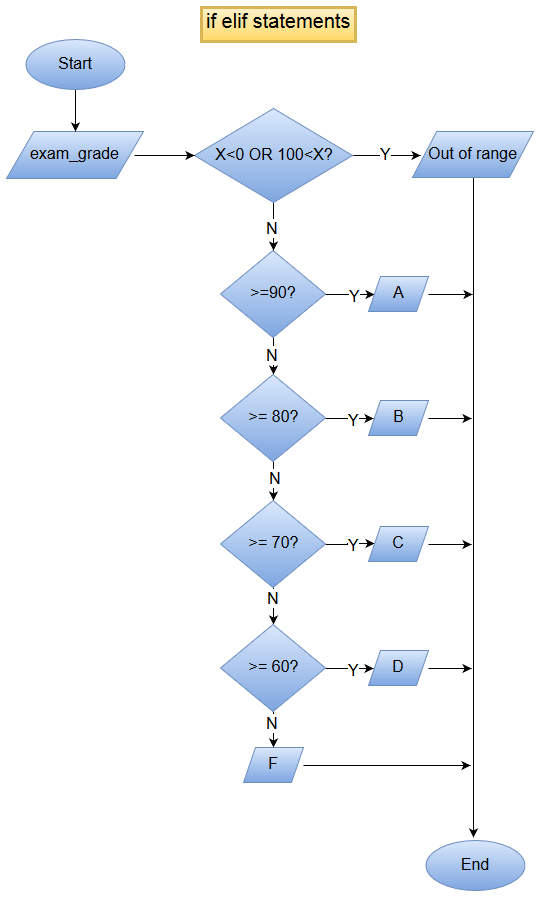 Nested if's enable the developer to cascade conditions and formulate intricate decision pathways. In the example, 'if else' and 'if elif' statements are used in combination to resolve multiple conditions. Something to keep in mind... when using an 'elif' or multiple 'elifs', it usually makes sense to ensure there is an 'else' to handle the default condition when none of the above are True. This concept was covered in an earlier chapter and is called a trailing else. 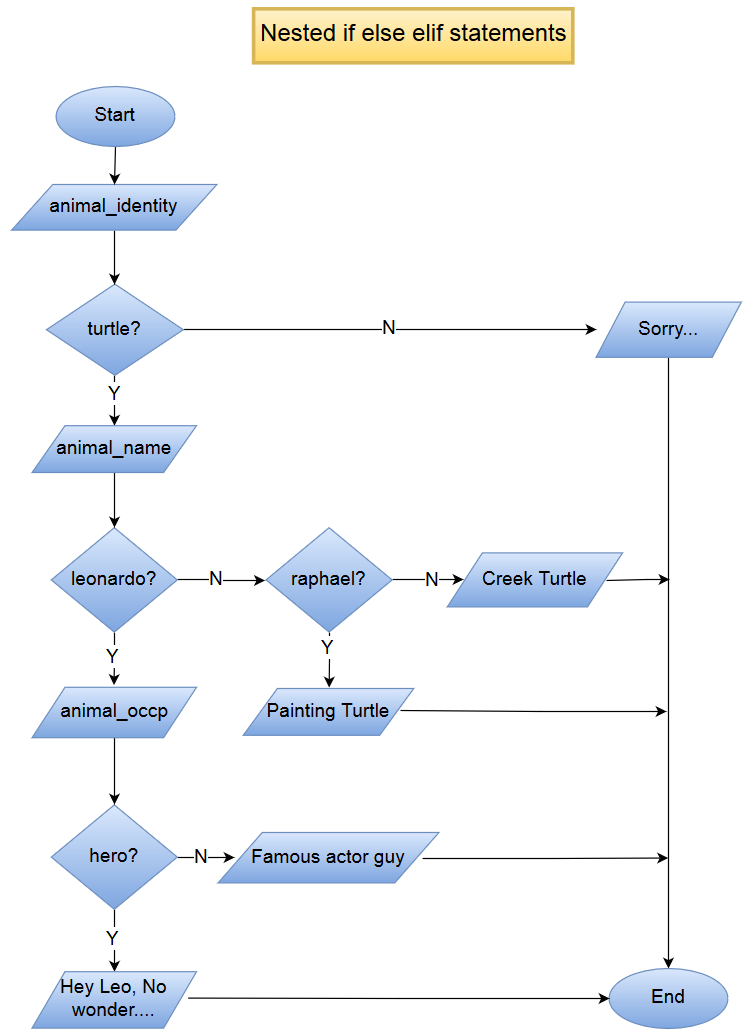 The last decision structure we consider in this chapter is the chained relational operators. Unlike many other popular programming languages, Python allows relational operators to be chained and used like they would appear in an algebraic expression. For example, two less than comparisons (<) are on line 87 in the 'if statement'. The alternative, and slightly longer way of writing those comparisons, would require an 'and' operator:

The code examples to match the flowcharts and discussions above. 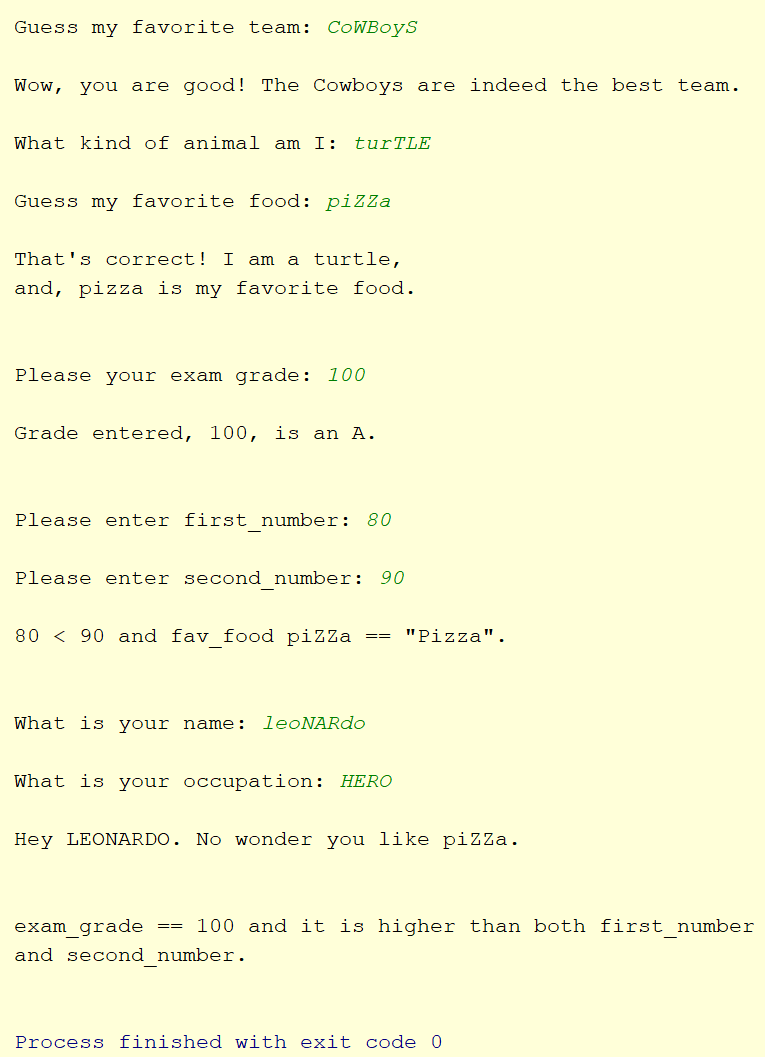 Those of you familiar with other languages may be wondering about the switch/case decision structure. Python does not have that structure but the same logic can be accomplished with a combination of 'if elif' statements.

For more about the new match/case, see the following: Structural Pattern Matching: Tutorial.